THE TEMPLE OF GOD APOLLONAS-PORTARA. THE ‘DOOR’ THAT CONNETCTS YESTERDAY WITH TODAY! 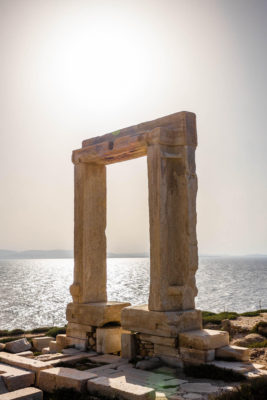 Naxos is an island that combines beauty and history, but at the same time hides a special mystery that seduces visitors. One of them is the famous Portara of Naxos, famous and unique all over the world. This is the large marble gate that stands high on the islet of ‘Palatia’, which today is connected to Naxos town and is the most photographed site on the island, as visitors can enjoy the sunset from there. Since the beginning of Greece’s history, God Apollonas, with Delos as its religious center, had spread to all the Cyclades. Embassies from all the islands arrived on the sacred island of God Apollonas to celebrate him, but even those who stayed behind took part in celebrations that occured in smaller sanctuaries. According to archaeologists and scholars, the temple began to be built according to the specifications of the temple of Olympian Zeus in Athens and of Goddess Hera in Samos. A few years later, Lygdamis lost his power to the Lacedaemonians and the plans for the completion of the temple were stopped.

In the 5th or 6th century AD. the ancient temple of Portara turned to Christianity with the faithful building a church on its ruins. This was until the Venetian occupation, when it was completely destroyed, with its marbles being used in other constructions, such as the Castle of the town. The only part that was not destroyed was the Portara, which consists of 4 pieces of marble weighing 20 tons, and due to its volume and weight, it was not easy to dismantle. Around it, traces can be seen from the foundations of the temple but also from the perimeter colonnade that was never completed. From the first moment of your visit to this point, you will feel an intense energy penetrating you and transporting you on a journey through time!