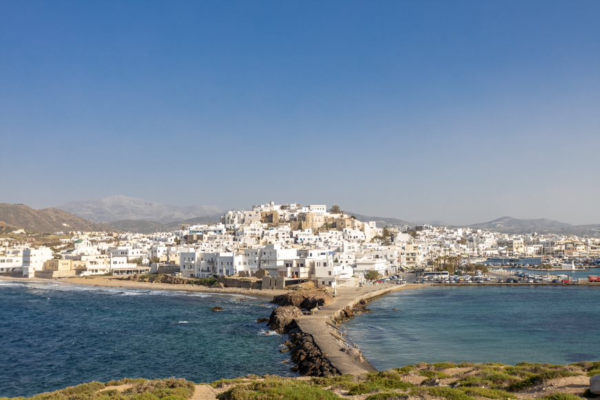 If there is one island that is associated as the favorite place of the Olympian Gods, it is Naxos!

Mythology holds a very important part of the history of Naxos, exciting every moment of our imagination and keeping our interest undiminished. Zeus, Dionysus, Semele, Theseus, Ariadne and the nymphs are just some of those who have left their mark on the island.

According to the legend, Naxos was named after the son of Apollo and Akali, who was the daughter of Minos. Apollo himself, the God of light and music, was especially worshiped on this island.

Zeus, Dionysus, Artemis and Poseidon were also worshipped on the same island. Although Zeus was born in Crete, Naxos was the island that he grew up on! This is the reason why the inhabitants of the island honored him, naming the highest peak of the island, Za, where the famous cave of Zeus is situated. The legend says that at this peak, an eagle carried the lightning to Zeus and that is how he gained his strength and became the lord of Olympus. After that, Zeus fell in love with Semeli, the daughter of the king of Thebes, who after their union, asked him to appear in front of her in all his magnificence. She, as a mortal, died at the sight of his glow just before she was able to give birth to the fetus, she was pregnant with.

But Zeus wanted the baby to be born! He sewed it on his thigh and very soon, God Dionysus was born in Naxos. Since then, the island worships the God of wine and he, in return for the love of the Naxians, endowed the island with rich vineyards. Today, Naxos has several of its own labels with local wines that have achieved awards worldwide.