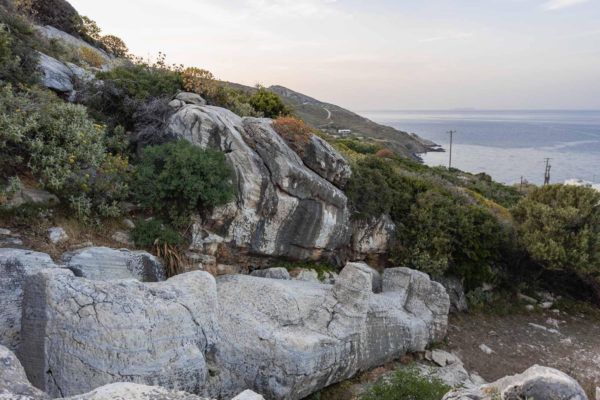 Apollonas! The village which Homer, the famous poet, refers to in one of his myths. The story mentions Dionysus, who once rented a ship from the Tyrrhenian sailors to return to Naxos. Ignoring, however, the divine nature of their passenger, they wanted to capture him. Once Dionysus realized it, he gave them wine to drink and to get drunk in order to escape. He immediately transformed the oars into snakes, while a vine climbed to the mast of the ship and the branches were filled with grapes. The sailors, frightened by this sudden phenomenon, got scared and fell into the sea, where at the same time they transformed into dolphins. Today, there is an inscription engraved on a rock: “Mountain of the holy village of Apollonas”.

The village is located on the northeast coast of Naxos about 36 km from the island town. It is a beautiful fishing village inhabited since antiquity, due to the marble quarry. Until 1960 it was the port of the ships that performed the “barren line” of the Cyclades while at the same time, it served as the port of the Koronida village (Komiaki). Naxian marble was also exported from this port.

The village used to have about 90 inhabitants with the main occupation being agriculture and husbandry. Nowadays, Apollonas village has developed into an amazing, tourist resort adorned with traditional white houses of Cycladic architecture, a wide variety of beach taverns and cafes, little shops and boutique apartments that make your stay even more enjoyable! In addition, it has a pier that serves fishing boats and small yachts.